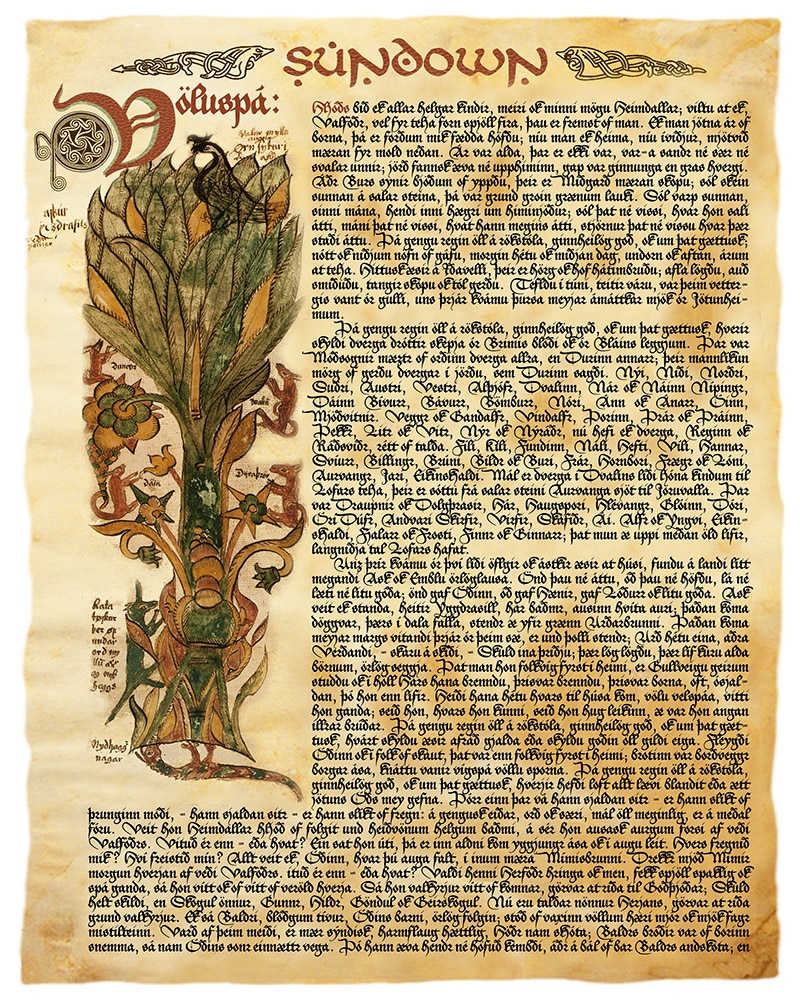 This 170 page book includes easy-to-read lyrics sheets for all twelve songs, including melody lyrics and all the subtle background lyrics that compete and interweave in larger choral pieces. It also includes 90 pages of original notes by composer Ada Palmer, discussing Norse mythology, Viking culture, the manuscript sources, the composition process, runes, modal music, and details about the lyrics, costumes and production of the Balticon debut performance. Extensively illustrated with black & white photographs from the production, and illustrations of manuscripts and artifacts.

Also included are eight Viking-themed poems by Hugo and Nebula Award-winning science fiction and fantasy author Jo Walton, including those which were written for the Kickstarter.

With this book in hand, you can read along with the CD, recreating the narrative of the stage play. Since the songs so often have multiple sets of simultaneous lyrics, the lyric sheets, spelling out the parts in clear columns, makes it possible to catch the subtle words hidden in harmony lines, and understand the interplay of world and characters created by the competing lines.

The bound physical book is currently sold out. This libretto is also available as a DRM-free downloadable PDF e-book, which contains color photographs. The e-book can be purchased through Bandcamp.

TOPICS COVERED IN THE MYTHOLOGICAL NOTES INCLUDE:

The Content of the Eddas
Chronology of Mythic Events
Women and Gender in Norse Myth
Magic, Witchcraft, Seid
The Vanir, and Why We Know So Little About Them
The Elves, and Why We Know So Little About Them
Odin
The Allfather’s Names
Loki
Loki’s Names, and Association with Fire
Baldur
Hel
Frigg
Snorri
The Seeress
Magni, Modi and the Survivors of Ragnarok
The Music and Songs
The Composition Process
Modal Music: Basics
Notes on Individual Songs and Lyrics
Production Details
Costumes
Balticon and the Rehearsal Process
CD Production
Bibliography