The science fiction fan community has always been a great source of support, both for Sassafrass and for myself, and it’s no exaggeration to say that I would have stopped composing years ago if not for the enthusiasm of fan friends and convention audience.  I believe that a great deal of good arises from the inspirational, aspirational and future-oriented messages that circulate in the world of science fiction and fantasy literature and fandom. I have tried to express those ideals and their value in pieces like this one, “Somebody Will.”
“Somebody Will” was awarded the 2020 Pegasus Award for  Excellence in Filking, earning the title of Best Classic Filk Song. 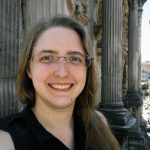